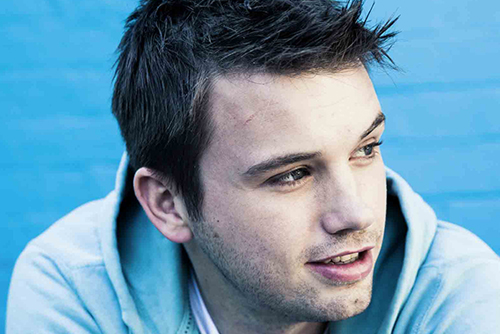 Picture this. The year is 1997, and six year-old Joe is in his family’s living room in the English county of West Sussex, blasting blues records on his dad’s hi-fi system. He says, “I was listening to a lot of Gary Moore, which is a really strange thing for a kid to be doing!”

Joe admits that music has always been in his blood, and since he was a teenager, he’s always had ambitions to be a performer. “I decided that’s what I wanted to do”, he says, “and I decided that the dream was strong enough for it to be real.”

The first song Joe ever wrote is called ‘I’m Not Leaving’. The song was in response to his family’s departure to Australia eight years ago, and Joe proudly says, “I definitely consider myself to be an Australian artist. My career started here, everything I know and love is here. It’s home to me and I’m as true blue as it gets. I’ve just got a silly accent.”

On his arrival in Australia, Joe decided to take his love for music to the streets of Sydney, performing as a busker. He says, “I started to make a little bit of money, and the rest is history. I busked 5 days a week since 2008, and it not only taught me about work ethics, but also how to read a crowd.”

And, as fate would have it, his audiences often led to some memorable encounters.  Not only did Joe’s busking attract the attention of international artists like Dizzee Rascal and The Script, but one day he found himself having a conversation with Nathan Morris, founder of the Grammy award-winning vocal group Boyz II Men. Joe explains, “He saw me playing in Pitt Street Mall, and he invited me to support the group that very night across the road at the State Theatre. It was pretty surreal.”

After scoring support slots for the likes of John Farnham and Lionel Richie, Joe auditioned for the 2015 season of The Voice, winning over the coaches and the nation, and ending up as runner-up of the series. “It was such a great experience,” he says, “and The Madden Brothers really taught me so much about performing. Being runner-up has been a blessing, because it’s given me time to take it all in and not feel rushed. I really can focus on my plan.”

Joe’s passion is palpable, and he says, “I just want to keep growing, and I just want to keep playing, writing and performing.” He continues, “I’m lucky because I’m kind of living my dream a little bit now. And the further you step into the dream, the more real it becomes, and the bigger the dream gets. You just keep looking further and further.” And Joe is making sure he won’t be looking back.

IMPORTANT:
Limited dates by The Peak Agency. Contact us for further details.