Is there a place for Country Music in downtown Sydney hotel venues? 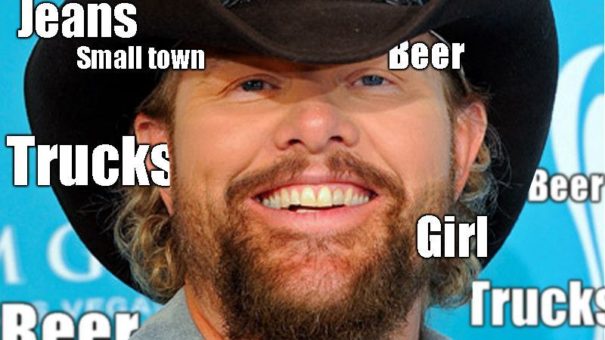 “…. vapid, corny, hackneyed, insipid, and for the most part platitudinous”, so wrote Alexander Theroux in his book “The Grammar of Rock: Art and Artlessness in 20th Century Pop Lyrics”.
He was generalising about Country Music.

He went on to pick out popular country song lyrics and turn of the century video  …
“Who of us is surprised that Tim McGraw in ‘I like it, I Love it’ sings:

‘Spent forty-eight dollars at the country fair
I throwed out my shoulder
But I won that teddy bear
she’s got me sayin’ sugar-pie, honey, darling and dear’.

No, we’re not talking intellectuals”.

“Kill me! A big grinnin’ country dunce sporting bare arms and an over-sized killer black Stetson with an outlandish 4 ¼ inch brim crunched up on the sides and pulled down in the back winning a teddy bear at a country fair and actually singing about it”.
“I well recall in my early teens hearing Ernest V Stoneham and the Stoneman Family singing in their bird-billed voices over the radio, ‘The Sinking of the Titanic’, with the dopey, because of the over obvious refrain, ‘It was sad when that great ship went down’. Ya think?
I recall they sang the truly memorable line, ‘They were going to build a ship that water could not go through’. Well, yuuuhhhh, that sorta works in the navigation business”.

“It is a country topas to portray most things urban, complex, scientific, academic, secular, European, northern, or poetic as either ridiculous or evil”.

And of the fans of these songs he mused …
“Was it for such people that the instructions for a medical thermometer advise … ‘do not use orally after using rectally’? That the side of a Slush Puppy cup warns ‘This ice may be cold’? That the box of a 500 piece puzzle reads, ‘Some assembly required’? …” and so on. He really got stuck in didn’t he (generally that is all he does).

(excerpts taken from Google’s  book preview and we assume okay to use for publication promotion purposes – see post end for link to book if you wish to purchase).

We figure that Alex was not a fan of American popular “Hat” Music. (we guess he wouldn’t have liked McGraw’s  ‘Truck Yeah’)

Of course, most of his commentary revolves mainly around anyone who goes on stage with a Stetson. Unfortunately, that is an ingrained, popular image held by most of the public who only hear break through tracks like ‘Achy Breaky Heart’, or, stumble upon masculinity challenged clips on TV (CMC). In this country it is generally thought of as bogan music and make no mistake, we have plenty of Tim McGraw wannabes. And it ain’t pretty.

For our part we quite like CM, if, it does not come with an adjective like those used in the opening sentence of this post.
It should be genuine to its nature and styles can be as wide as bush or urban pop (and yes, it can come very rarely, extremely rarely, in a hat).

As a child this author remembered “hat music” that was in the dad’s record collection and it didn’t impress. Then as an older kid along came local tracks like “I’ll be Gone” (Spectrum), “Gypsy Queen” (Country Radio), “Way Out west” (The Dingoes) and others that did make an impression. Maybe not labelled country at the time but the feel is unmistakable. And generally that is the way it is with much of likeable CM … it doesn’t get labelled. Songs like “Me and Bobby McGee”, “Take It Easy”, “ Dead Flowers”  and others bordered around similar sounds and were in the same record collection as Sabbath and Purple. In brief, the list of  “un-intended” country flavoured classics is a long one and covers decades. Some of the notable Australian ones over the years being, “Khe Sanh” (Chisel), “Oh No Not You Again” (Australian Crawl), “To Her Door” (Paul Kelly), all of which had country elements.

If it doesn’t come in a hat and have a label then the public will judge it on it’s own merits.

So why bring this subject up?

Two reasons:
1. We had a new venue opening and as part of their brief they wanted an “ acoustic” option for a Thursday night that could feature once a month and something that not every other venue was doing and additionally could not be the same as an alternate acoustic night planned for other Thursdays (had to be free entry), and almost simultaneously, 2. Another venue best known for it’s high end DJ programme mentioned they were thinking of a CM programme and asked us what we think and could it work. That meant we had to consider it.

Well, maybe, if you present it (country music) (in Sydney) and don’t obviously label it, then they (the public) may come. Or at least, won’t leave, or deter them from attending that night.

It may provide venues with access to a market that they don’t otherwise tap into.

The acoustic nature (when stripped) sits in harmony with the hospitality offerings that a venue provides and as such does not pose operational obstacles (especially to food trade). It has the potential to enhance it, especially mid week.

Basically it is pleasant to the ear, melody based, acoustic guitar driven music or story telling for the mainstream public.

There are already various CM acts working the Sydney circuit performing covers in order to fund their original record releases and marketing. Mainly, they are musicians that may have considered they will unlikely get airplay on capital city radio for their acoustic based original music so they have opted to ply the country music circuit in the hopes of gaining media exposure via that route, or simply, they actually like country music. They can play, they can sing, and, in general are more entertainment focused than other acoustic style performers. You can put them on stage in a Sydney pub and their first instinct will be to entertain. They are likely to have quality promotional material, their own PA system and some stage lighting, and repertoires that include both original songs and also complimenting country covers.

The word Country in advertising can and most likely will hurt. Especially as you get closer to the CBD.

Potential is there for the performer’s fan base to arrive in numbers. Why would that be a problem? … sometimes, elements of that fan base (a small number) may have unintended consequences for the image of the performer and consequently the venue (see Alex’s thoughts on thermometer instructions). Core patrons are unlikely to see themselves associated in that image.

Patrons may smell out that it is country music and just not attend the venue on any night where they think it’s on (possible habit forming).

Many CM performers have active social media and good followings, but, they are likely not in a venue’s immediate geographical area (they are widely dispersed).

We think a programme could be attempted if the above information is taken on board.

It should be run at budgets that allow for free entry and it’s purpose would be to compliment a venue’s hospitality offerings (perhaps also include special menu items. (Band options have not been considered due to budget and volume).

Easiest way in for an urban venue (that suits venue marketing) is to present the modern element of the genre most recently popularised by Taylor Swift, Lady Antebellum, and one of our biggest current music exports, Keith Urban. Can expand it to a more earthy CM sound that sits into the blues roots genre.

Outer suburban venues may be able to vary to a wider mix.

“Cause one more heartfelt steel guitar chord
Girl, it’s gonna do me in
I need to hear some trumpet and saxophone
You know sound as sweet as sin

And after we get good and greasy
Baby we can come back home
Put the cowhorns back on the cadillac
And change the message on the cord-a-phone”.
(John Hiatt, Memphis In The Meantime).

This Blog post is meant to provide an insight in to some of the questions we get asked as a Venue Representative. Posted to our Facebook page on 12 July 2016.

and, it will save you looking it up … (enjoy or destroy)…

The Grammar of Rock: Art and Artlessness in 20th Century Pop Lyrics